Elaflex was the sponsor and host of a luncheon for Latin American members and visitors to the convention. The event had record attendance, and those present received valuable information about the benefits of belonging to the PEI.

Frank De Poli, Managing Director of Elaflex Latin America, was one of three moderators of sessions aimed at discussing topics of great interest to PEI members and visitors to the Convention coming from Latin America. Topics included electromobility, regulatory requirements in the region, and challenges associated with hiring, training and motivating human resources in today’s market. Record participation and excellent exchange of ideas.

Also, we are pleased to announce that Frank De Poli has once again been asked to serve as a Co-Director on the PEI Board of Directors, representing District 12. This District includes manufacturers of nozzles, hoses, valves, couplings, tank coatings, gauges and secondary containment systems from around the world. He has held the position of Co-Director for many years, and the term of this assignment is for 2 years, finishing in October of 2024.

Frank De Poli is Regional Director of Elaflex for Latin America as well as CEO of the ARPEC Group of companies operating in Latin America. 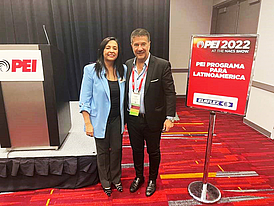 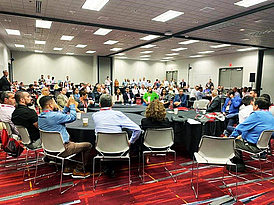