Elaflex Ltd have won the APEA Milestone Award 2017, for '30 years in the UK' at the APEA Live Awards ceremony in November 2017.  The award was presented to Anton Martiniussen and his team, by Ross Bingham of Meridian Electrical (Eastern) Ltd.

The APEA Live 2017 also saw Anton Martiniussen re-elected as Chairman of the APEA.

The Association of Petroleum and Explosives Administrators (APEA) is a UK based organisation, with focus on safety, best practise, technology, regulations and state of the art equipment for the petrol station forecourt sector. Members come from all sectors of the petroleum industry, including Regulators from National and Local Government Authorities. 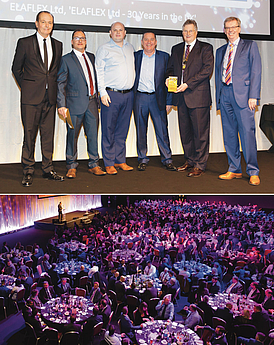